Film, all art, takes time and consideration. Without that time put in, the work looks less like a well thought out message and more like a thought. Everyone has thoughts. Thoughts aren’t special.

Today, the process of creation for filmmakers is getting easier and easier. With almost no effort, someone can get images from script to screen in a day. While the barrier to entry used to be prohibitively high for the majority of “thinkers”, leaving only the most determined and financially viable to pursue, it’s now something you can do almost instantly for next to no cost. While this extra time afforded should be used for greater reflection, analysis and consideration, it rarely is. In many ways this new technology has made that process as difficult as it is simple.

Where writing is often difficult, typing as an act is simple. The problem is the cursor; it just sits there blinking. Antagonizing you. Urging you think and deliver in one swoop. Then there’s the rest of the computer, the internet, and every movie you’ve ever heard of. Everything in the world, every escape, in front of you on the same screen demanding your attention. The word processor, relentlessly nagging you to type something, anything, just to end the page’s blindingly empty existence and fill it with meaning. By switching to writing longhand, you get to steal away with your pencil and paper and figure your own stuff out. The paper is your friend, it’ll wait for ya until its atoms fall apart. The pencil is potential energy. You find yourself actually using them when you think of something because it’s just “there”. I don’t have to open Google Docs to take a note, or open my phone and search for the right app before opening Instagram by reflex and getting distracted. Idea, pencil, paper. Done. And notebooks can’t be hacked! Enjoy your privacy, write your darkest thoughts. Your pencil won’t tell anyone.

For this reason, and the widely accepted benefits, I write almost everything longhand in pencil (in Field Notes notebooks, obviously). 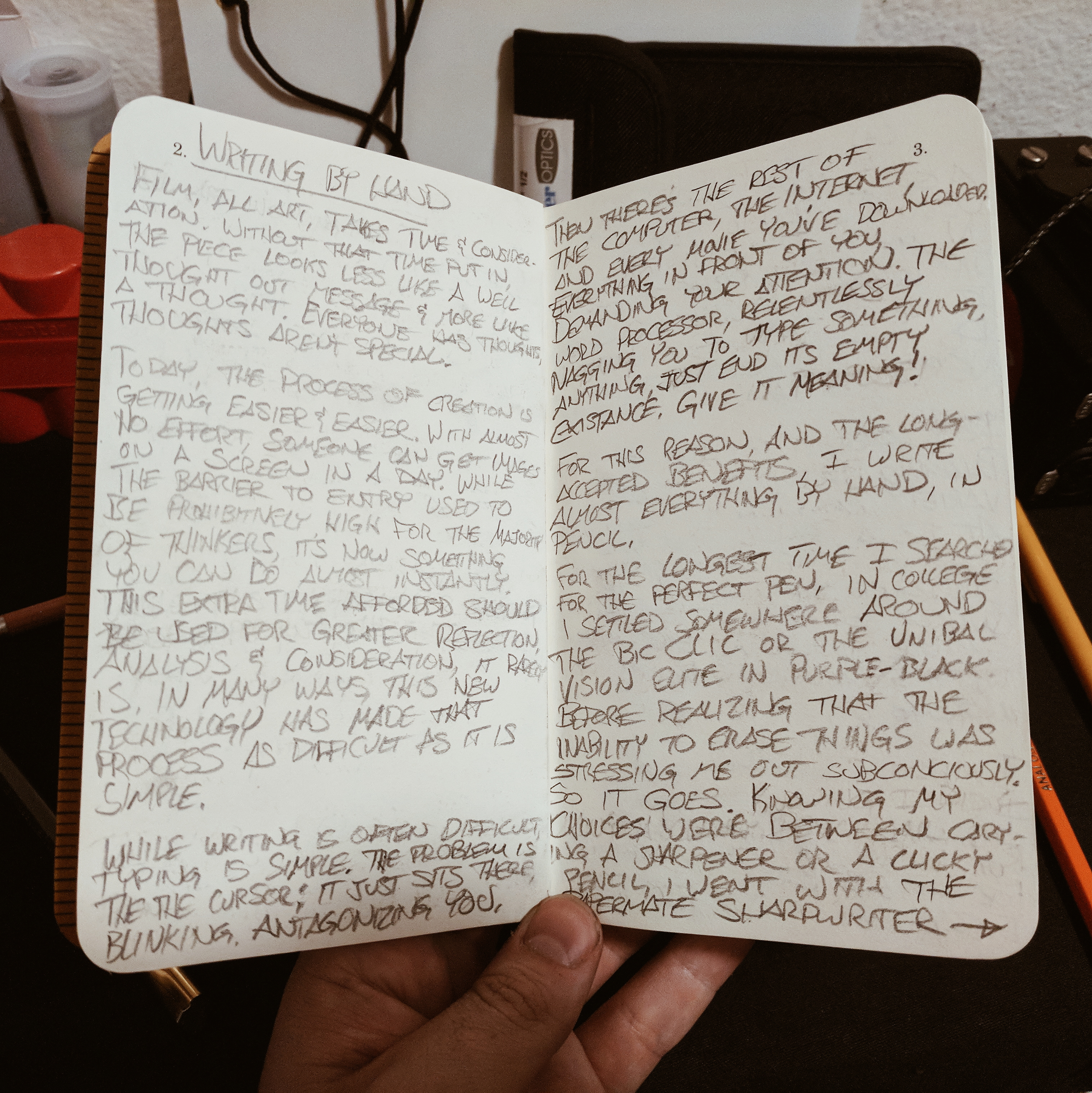 For the longest time I searched for the perfect pen. In college, I settled somewhere between the Bic Clic and the Uni-ball Vision Elite in purple-black before realizing that the inability to erase things was stressing me out subconsciously. So it goes. Knowing my choices were between carrying a sharpener or clicky pencil, I went with the Papermate Sharpwriter on the tacit recommendation of Adam Savage. It’s a great pencil, they’re ubiquitous, it won’t break in half in my pocket, and the twisty tip is natural, simple, and it never jams. So can I do better? According to pencil nerds, I can.

$24 later, a 12-pack of Palomino Blackwings -the 602 variety- landed on my doorstep. At $2 a stick, plus the cost of the aforementioned sharpener I had to buy, this quickly became an expensive gamble. Would my ever important writing experience drastically improve?

I’ve been using them for a month now and It’s hard to min/max graphite but I can say that I reach for the 602 every time. It just feels better. The 602 writes like a .7 pen, where the Sharpwriter is more like a .38: scratchier, slightly thinner, and a bit lighter. The eraser is a better shape on the Palomino, allowing for targeted or blanket erasure of your letters, but the the standard pink jobby on the Sharpwriter is more effective. You can get the pink guy in a pack of 10 replacement erasers but hey, it doesn’t come with it so I can’t speak to it. The heavier back end also makes the first inch or so of use sort of “bouncy” due to the pencil’s length. Aside from all that, I had to give it a quick, light, fine-grit sanding because of how slick it is. I guess we can call that feature “customizable grip”.

It doesn’t need much sharpening but even so, on the topic of slowing down, the moments you take to renew the point of your pencil are a welcome reprieve and allow for further reflection. It’s also just a pleasurable thing to do. It’s like renewing potential and aesthetics in one move.

Am I over-analyzing an expensive stick? Yes. But it’s a pleasant piece of wood that smells like cedar and makes me happy, and that’s more than one can say for most writing utensils. Have I tested other pencils against the 602? Also yes. I’ve pitted it against the Field Notes pencil and a free one I got from photographer Mike Padua and while they’re both fine pencils, I can objectively say the 602 is a smoother writing experience. The lead is smoother and darker. Also, the Blackwing doesn’t squeak when you sharpen it, which was a spine-shivering experience I wasn’t prepared for with the Field Notes pencil.

Today, we’re so used to thinking and reacting immediately to every single input that the act of slowing down and going through your thoughts at a more manageable speed will feel like a mental massage every time and you’ll catch yourself adding more depth to everything because you’ve taken the time to consider what you’re doing. Obviously I’m making sweeping generalizations here, and if you do this already I’m preaching to the morgue, but if you’re not putting that time into your work and always shooting from the hip, you’re gonna self-limit. That’s why we have pre-production.

So, overall, would I recommend purchasing a pack of 602s? Sure, if you can afford the “luxury.” That being said, if only the best will get you back into writing longhand, then do it immediately. Your mind, your art, and your work will thank you. That being said, if you know of a better pencil, tell me.